“My hats off to Alistair Overeem. I’ve had a really difficult couple of years with my disease. Tonight is the last time you will see me in the Octagon,” Lesnar said during the post-fight interview. “I want to thank everybody—the Fertittas, Dana White. Everybody you’ve been great. I’m here to say that Brock Lesnar has officially retired. I promised my wife, my kids. If I won this fight I’d fight one more time for the title. If I lost, I’d retire.” 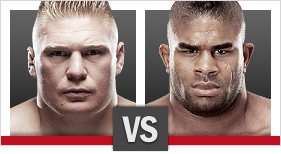 UPDATE:  Did you see that “Targeting” by Overeem?  That is how to take someone out without a lot of effort.  He repeatedly targeted Brock’s Liver and once the Liver starts to quiver, it is all over.  There are several targets on the body that will result in a KO.  Check out the “TARGETS” page to learn where they are.

HAYWIRE the movie with Gina Carano 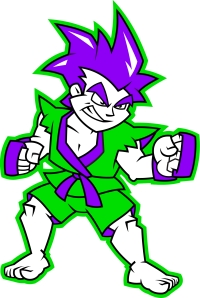 "Stryker" our mascot. Buy at kidsfightshop.com

Welcome to the  First and Only Free Online Mixed Martial Arts School on the internet! Starting Soon!

My goal is to help promote the sport and people of Mixed Martial Arts and to help build a NEW BREED of SMART FIGHTERS.

1.  We will be adding a complete Mixed Martial Arts curriculum for you to use for Free.  This site should be used in conjunction with a local coach and gym.  For those of you that already train at a gym then learn the move, technique or “play” and ask your coach to tweak and perfect it for you.  I am trying to put together the most unique and comprehensive curriculum in the world.  In order to be a great fighter, you will need training and sparring partners and also local coaches and trainers.  Everyone’s skill set is different and unique.  You will not be able to become a Mixed Martial Arts Champion unless you spar and find a coach that can tweak these techniques according to your own skill set, body type, weight and level of strength & conditioning.  If you are not interested in competing then this site will be a great way to learn the skills and have fun practicing the fastest growing sport in the world!  TRAIN SMART-FIGHT SMART!

2.  Here are some unique things that you will learn:

3.  We plan on interviewing prominent fighters, coaches and trainers throughout the MMA community.

5.  We plan on sponsoring fighters.

6.  We plan on selling clothing and gear.  Check out http://www.kidsfightshop.com for a small sample.  We will be adding more designs in the future.

7.  The most exciting thing for me is starting an MMA belt system to go along with the curriculum.  How would you like to be able to finally earn your Mixed Martial Arts Black Belt?  This will not be easy ofcourse, but those of you that have already been training in MMA for years will finally have a chance to be recognized by earning your black belt.  This will have a small fee attached to cover expenses and for us to critique and evaluate your skills.